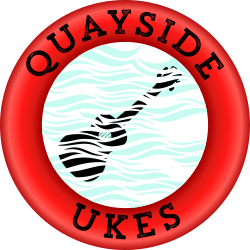 Coronavirus All jams cancelled for the time being.

When things return to normal:

Hi Everyone,
Our big Christmas Uke at the Duke (now Yacht Club) is next Tuesday, 12th December, at 7.30pm. It will be upstairs at The Sussex Yacht Club, which is now our new home. We will be using books 4, 13 and the Christmas songbook 2015. The Yacht Club is about 200 yards west of the Duke Of Wellington Pub, on the harbour side. Please come along and join in the festive fun, we're hoping for an even better turnout than last year, especially as we've now got more space.

We will be using books 1, 7 and 14. Sadly Fats Domino died since our last meeting so we will commemorate him by playing Blueberry Hill from Book 10 song 6.

I hope you will all try and come along to this meet as it will be the first to be held outside of the Wellie, help us get set up and make it work for the future. Times are the same as always, 7.30pm till 9.30pm.

Really hope you can get along.

We are moving! Starting November 2017 our jams will be held in the Sussex Yacht Club. Our first jam there will be on 14th November.

Please remember the mini-jam on 24th October (using books 1, 7 and 14) is still at the Duke of Wellington.

This meeting takes place in our existing venue the Duke of Wellington. Thank you for all your feedback over the last month, I will be issuing the address for the next jams on the night, those who cannot get along will receive emails giving the details. 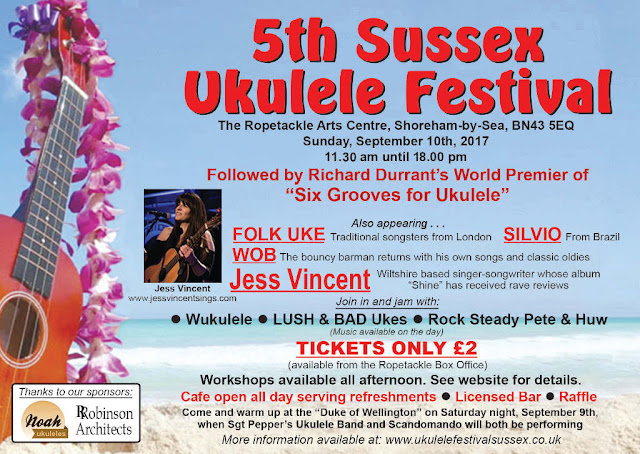 But before that of course we have the Festival warm up night at the Welly and the main Festival at the Ropetackle.

Tickets and workshop bookings are going well, so if you need to get a ticket please contact The Ropetackle box office online, by phone or in person.

Workshops can be booked via ukeattheduke@outlook.com

Times of what's happening can be found here.

Just a couple of things to update at this stage. First update is a slight change to Jess Vincent’s workshop which is now called "Improve your playing through song writing." Don’t worry about having to write the next big hit, Jess will lead you through the process and you will still hopefully improve your playing.

Second update is that due to a serious illness Folk Uke will not now be playing however we have a fine replacement in “The Roots Ukulele Band” who will perform a selection of original and cover songs.

See you at one, two or all three events.

Hope you're enjoying the sun, but if you can drag yourselves away from the sunbeds we will give these books a go next Tuesday.

Tickets are selling well for the festival so please ensure you get yours soon. They are just £2.00 and available from the Ropetackle box office.

If you want to attend any of the workshops please let me know by sending a separate email to ukeattheduke@outlook.com

Please do not reply to this email but start a separate one, workshops available are:

All workshops are suitable for players of all abilities, they all promise to be popular so please sign up quick!!

Looking forward to seeing you all next Tuesday

Lots of info on the festival coming out soon, so keep an eye on the Festival website and the Facebook page for details, the main thing to remember is that you must get a ticket before the day priced at just £2.00 and they are available from the Ropetackle box office.

As you all know the festival kicks off on the night of the 9th September at our home pub "The Duke of Wellington".

We have brilliant blues uke player Charlie Beer, watch him here and then do a workshop with him the next day. This will be followed by the last chance to see Sgt Peppers Lonely Hearts Club Band as played at last year's festival. Lots of colour, sing-along and frolics.

The evening will conclude with a full set from Scandomando who took the festival by storm last year.

We move down the road to the Ropetackle Arts Centre where this year you will need to have bought a ticket. Many of you will know that I have tried to keep the festival as free entry for the last five years, but we are a victim of our own success in that last year the numbers sailed close to the wind on fire regulations and exit points. The Ropetackle as a public licensed venue has to conform and I for one would not want to see them penalised as a result of my actions. Tickets will be a nominal £2.00 and you will need one even if you're playing as one of the jams.

For your money you will get to see:


There will be lots to join in with too. Jams will be led by Wukulele, Bad/Lush, Rock Steady Pete and Hugh.

There will also be workshops led by:

More details as I have them.

Activities will cease at 5.30pm, then at 7.00pm the auditorium will host the world premier of Richard Durrant's "Six Grooves for Ukulele" which you can be a part of, for further details download this file (pdf).

This will be a fantastic opportunity to improve your playing and to be part of a performance with a string section and much more.

Richard's performance will be a separate ticketed event priced at £18.00 seated or £14.00 standing.

All tickets available from the Ropetackle box office (as soon as this opens I will email out to you).

Looking forward to our next meeting when we will be using Books 14, 12 and 5.

Looking forward to our next meeting when we will be using Books 14, 11 and 6.

On Saturday 22nd April Uke at the Duke will be taking over the foyer of the Ropetackle Arts Centre, Shoreham-by-Sea as part of their tenth anniversary celebrations. This is a free event with a variety of jams led by Richard Durrant and other well known Duke leaders, plus a performance from local uke group Secret Moonshine.

3.00 The Ukerladies jamming from this book

4.00 Jam along with Rocksteady Pete and Huw from this book

Do come along to join in, listen and sing in celebration.

This month we will be launching our new book 14. This is a month earlier than planned thanks to the hard work of Pete "Rock steady" Clark. You have suggested a wide range of songs and we will give a few of them a go.

A couple of events for your diary:

Well despite the fact that this month's meeting falls on Valentines day I have resisted the temptation to make it a love special and will stick to books 13, 2 and 4.

Progress is being made on the Festival and I should have some news for you shortly.

Looking forward to seeing you soon

At the start of another year we shall be using our newest book 13, along with our oldest book 1 and with help from book 9.

There are a lot of things planned for this year, so lets get in the mood for 2017 with a rousing strum and sing-a-long.